Well-trained researchers and engineers are the backbone of a successful energy transition, and universities play a crucial role in preparing students for their future roles. With this in mind, the SMAGRINET consortium developed and implemented three educational modules addressed to Masters students. In all three piloting rounds, a total of 240 participants from six universities were registered. The overwhelmingly positive feedback we received lets us conclude that the approach was effective and well-designed, and as a consequence, we plan to extend the initially intended project concept and offer the courses again in the coming years.

Finally graduated, holding the master’s diploma in one’s bag, full of proud and satisfaction – this is what many students dream of. But what is next? Where to go, once there is no need to visit the lecture hall anymore? What to do, once there are no more exams and assignments? While this may feel like enormous freedom, at the same time numerous young people face open questions when looking for their first job. Their expectations and wishes - to do something personally interesting or beneficial for the society – are confronted with practical issues, such as the skills they were able to gain at the university and the demands of their future employers. Especially in the engineering professions, the profound and rapid technical development calls for novel methods to prepare the new generation of workforce and researchers. This challenge is exactly the focal point of the SMAGRINET Project.

Six consortium universities, accompanied by industrial partners, joined their expertise with the aim to revive the current educational programmes and adjust them to the requirements of the energy transition. That is how the three case-based teaching modules came into life: “Artificial Intelligence in a Smart Grid with Prosumers”, “Economic Operation and Societal Challenges” and “Connection Planning in Smart Grids” - covering a broad spectrum of topics and dimensions of smart grids, listed in Table 1. To cope with this variety, each module was developed by two universities, supported by industrial partners. Thanks to the mutual and interdisciplinary exchange, hundreds of lecture slides, complemented by interactive exercise and laboratory tasks were designed. 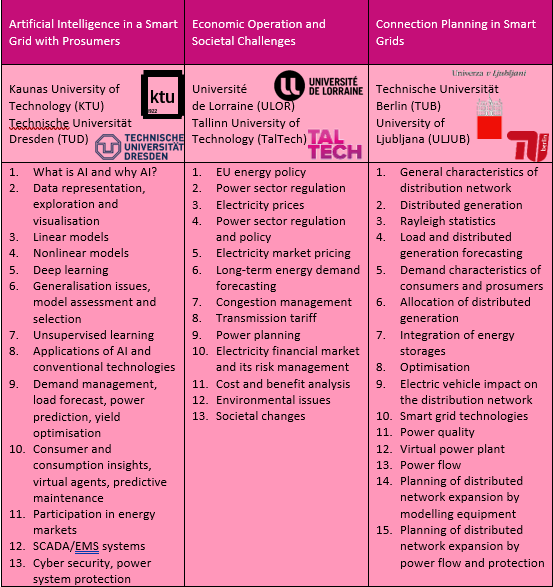 Table 1: Overview of the modules

As shown in Figure 1, after several months of preparation, the modules were successfully launched in the first piloting phase, starting in January 2020. Yet, a few weeks later, the consortium faced another enormous challenge – the global Covid-19 pandemic. Needless to say how strongly this situation affected the everyday life at the universities – students locked in their homes instead of swarming on the campus, lecture halls turned into Zoom rooms, not to mention laboratory exercises or exchange programmes, which were entirely cancelled. As far as possible, also the SMAGRINET courses had to be adapted to the arising circumstances, mainly by offering the classes online. All these difficulties notwithstanding, the consortium partners managed to conduct the planned piloting according to the timeline presented in Figure 2. Notably, TUB and ULJUB decided to offer an intensive one-week course, while all other universities distributed their classes over a few weeks. At the TUD, the adjustment of the course to the pandemic situation took a bit longer, so that consequently the implementation was postponed till November 2020. In sum, 81 participants were involved in the offered activities.

Not only students learned something during the courses, but also the teaching personnel. Preparing a brand-new university module feels like diving into the unknown. Will the students understand the formulas? Are the lecture slides appealing? Speaking too fast impairs comprehension, speaking too slowly seems boring… And above all, is the content interesting and useful? These doubts were partially answered during the evaluation process. After finishing the course, participants were supposed to fill in questionaries and rate the pedagogical approach, lecture part, exercise part, and their overall impression. Figure 4 illustrates an extract of the obtained responses for the statement “Students are invited to participate during the exercise sessions”, for each module and each piloting round respectively. Indeed, in most cases positive feedback was received. Of course, some suggestions for improvement were expressed as well and this served as a basis for modules’ content revision before the second implementation.

Another important task was the preparation of the teaching personnel, so that each university can conduct the lecture and exercise sessions on their own. By means of compact manuals and Train the Trainers workshops, local university staff was able to familiarise themselves with the content designed by other partners. Consequently, the modules can be offered independently even after the project ends.

As shown in Figure 3, the second piloting started in September 2020 at TalTech, followed in October by KTU. Parallel, TUD conducted the delayed first implementation. TUB and ULJUB once again opted for a block course and ULOR closed the round in February/March 2021. Thanks to the extension of the project duration, even at the TUD it was possible to schedule one more pilot in autumn 2021, so that all universities managed to achieve the project’s goal.

Once again, feedback from the 98 registered students was collected and evaluated. After all, this is the most straightforward way to assess whether the introduced improvements were appropriate.

The largely positive reception of the courses and the aroused interest among students and university staff convinced the consortium universities that the SMAGRINET journey does not end after the second piloting phase. On the contrary, the developed modules became part of the curriculum or standard teaching offer at TalTech, KTU and TUB. The three universities already scheduled a third pilot, as depicted in Figure 5. Additionally, the timeline of the second round at the TUD is visualised there. Despite the initial obstacles resulting from the health crisis, TUD also considers further replications of the course. One can hardly imagine a more promising way for dissemination of the project’s achievements and appreciation of many months of demanding work done by the consortium partners.

In view of this, even though the project officially comes to the end of its lifetime, it is definitely just the beginning of the educational process which will prepare future researchers and employees for the requirements of the energy transition. With the developed case-base modules, the SMAGRINET consortium provides a significant contribution to this task. The successful implementation of the courses proves how fruitful the cooperation of international universities and industrial partners in tackling the emerging challenges can be.

SMAGRINET Project may use cookies to memorise the data you use when logging to SMAGRINET website, gather statistics to optimise the functionality of the website and to carry out marketing campaigns based on your interests.

They allow you to browse the website and use its applications as well as to access secure areas of the website. Without these cookies, the services you have requested cannot be provided.
These cookies are necessary to allow the main functionality of the website and they are activated automatically when you enter this website. They store user preferences for site usage so that you do not need to reconfigure the site each time you visit it.
These cookies direct advertising according to the interests of each user so as to direct advertising campaigns, taking into account the tastes of users, and they also limit the number of times you see the ad, helping to measure the effectiveness of advertising and the success of the website organisation.

Required Cookies The cookies allow to customize the commercial offers that are presented to you, considering your interests. They can be our own or third party cookies. Please, be advised that, even if you do not accept these cookies, you will receive commercial offers, but do not match your preferences.

Functional Cookies These cookies are necessary to allow the main functionality of the website and they are activated automatically when you enter this website. They store user preferences for site usage so that you do not need to reconfigure the site each time you visit it.

Advertising Cookies These cookies direct advertising according to the interests of each user so as to direct advertising campaigns, taking into account the tastes of users, and they also limit the number of times you see the ad, helping to measure the effectiveness of advertising and the success of the website organisation.